Sri Nrusinghanath, the great temple of Odisha in India, is situated at the foot hills of Gandhamardhan Hill near Paikmal, Bargarh. The King of Patnagarh, Baijal Singh Dev, laid the foundation of this historic temple in 1313 A.D. It is only 45 feet in height, divided into two parts: the first being the seat of the Lord Nrusinghnath, the second allotted to Jagamohan (antechamber having 3 gates and each supported by 4 pillars.

Around six hundred years ago, a woman Jamuna Kandhuni as referred in the book “Nrusingha Charitra” composed a Kavya that sings the glory of Marjara Keshari in regard to suppression and repression of torture and tyranny of Musika Daitya. According to the legend,when people were greatly afflicted by Musika Daitya (the incarnate Mouse Demon), Vishnu Mani in the appearance(Incarnation) of Marjara Keshari,in His Feline Form,ran to eat the demonic mouse form – Musika Daitya who never came out from the tunnel and Marjara Keshari waited from that day. The temple is reputed from that day with this mythological history. This story is symbolic of the grounding the demonic evil power of tyranny and torture that never dared to come out further and Lord Nrusinghnath alias Marjara Keshari has been guarding it since then. According to Huen Tsang, the Chinese traveler, this place was a centre of Buddhist scriptural learning. Lord Nrushinghanath is a much-adored deity of Orissa and a great fair is held in his honour on the 14th day of bright fortnight in the month of Vaisakha. According to Oriya and Devnagari inscriptions, the temple was built by Baijal Dev in the early 15th century AD. The temple is constructed in Orissan style of architecture. 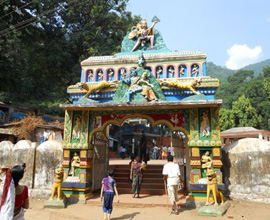 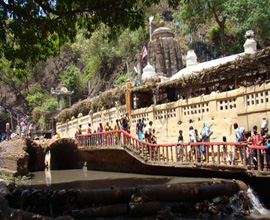 Kedarnath Shiva Temple is an ancient stone temple, situated at Ambabhona, about 40 km Baragarh, in Orissa. It is one of the eight temples dedicated to Kedarnath Shiva, constructed by Dakshin Rai, the Dewan of Raja Ajit Singh of Sambalpur. The presiding deity here is Lord Shiva. This 11th – 12th century temple is an outstanding example of the Chauhan architecture. The architectural fragment includes a round stone piece (Mastaka) kept in the north-east side of the temple. In the lower portion of the Mastaka, there are four single-hooded Nagas carved in all four corners. 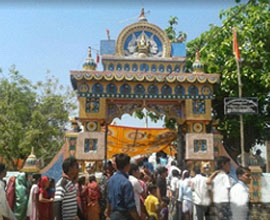 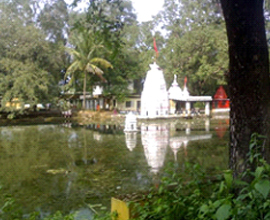 Baidyanath Temple is situated at Deogaon, in Baragarh District of Orissa. It is one of the eight Astasambhu (Shiva temples) in Baragarh. Deogaon is about 19 km from Chiplima. The presiding deity here is Lord Shiva. The temple, built during the Chauhan period, is an outstanding example of the exquisite Chauhan architecture. This temple, though small height, is of great artistic beauty and with picturesque background. Baidyanath Temple can be approached from Chiplima, around 36 km from Sambalpur. 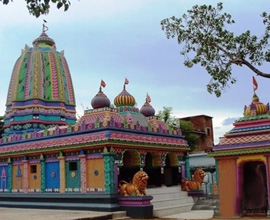 Balunkeswar Temple is located at Gaisama, a village 13 km south-east of Baragarh district of Orissa, on the bank of Jira River (a tributary of river Godavari). This temple was built during the chauhan period in Orissa. It is an ancient shrine, and one of the Astha Sambhu (eight Shiva temples) in Baragarh and Sambalpur district. Balunkeswar Siva is worshiped in this temple. 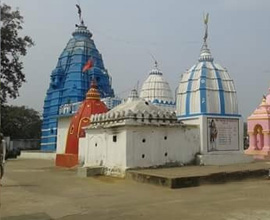 It is temple of Baba Shyam. It is second in all in India of its type. 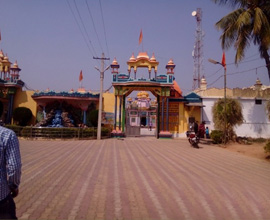 Dhanu jatra or Dhanu yatra is an annual drama-based open air theatrical performance celebrated in Bargarh, Odisha. Spread across a 6km radius area around the Bargarh municipality, it is considered as world’s largest open air theatre. It is based on mythological story of Krishna (locally known as Krusna), and his demon uncle Kansa. Originating in Bargarh, in the present day play, the enactments of the play are being performed in many other places in Western Odisha. The major one of these is the original one at Bargarh.[8] It is about the episode of Krishna and Balaram’s visit to Mathura to witness the Dhanu ceremony organized by their (maternal) uncle Kansa. The plays start with the dethroning of emperor Ugrasena by the angry prince Kansa, over the marriage of his sister Debaki with Basudeba, and ends with death of Kansa, and Ugrasen restoring back to become the king. There is no written script used in these enactments. During this festival Kansa can punish people with penalty for their mistakes. Biju Patnaik, the former chief minister of Odisha was fined once along with his ministers. 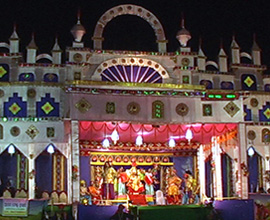