The Koilighugar water fall is situated 55 kilometer away from Jharsuguda in the Lakhanpur block near the village Kushmelbahal. A rivulet named ‘Ahiraj’ takes origin from the ‘Chhuikhanch’ forest and while flowing through its rocky belt falls from a height of 200 ft. creating the water fall of Koilighugar. After the fall the rivulet flows west wards to merge into the river ‘Mahanadi’. It is a picturesque beauty spot with its sylvan back drop.

Inside the fall there is a Shivalingam known as ‘Maheswarnath’. The lingam is submerged in water and not ordinarily visible. If somebody tries to see it from inside the water in winter and summer the lingum is visible under the reflected sunlight, hence for the benefit of the pilgrims another Sivalingam has been created outside the waterfall.There is an “Ashram’ of a holy man “Saham swami’ near the water fall. Every year a fair sits in Kalighugar on the occasion of Sivaratri. 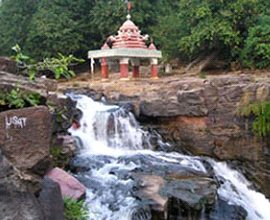 Rock Painting and Lithography of Bikramkhol

On the Jharsuguda-Lakhanpur Road at about 25km. from Jharsuguda there is a village known as Banjari. In the vicinity of the village the ancient cave of Bikramkhol is located. In this inaccessible dense forest ancient people lived surviving on fruits, roots and animal meat. During 4000 BC there was evolution of human civilization in the region and a script was developed by them.

There are some ancient script engraved in the wall of Bikramkhol and also paintings of animals. Circular holes have been dug in the wall where weapons, dress and other articles of use were being kept suspended. Even on the floors circular holes have been dug to pound the grains. Bikramkhol has been declared a tourist spot by the Central Government and tourists, historians and researchers from all over the country and abroad. 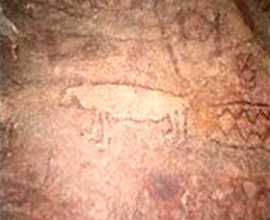 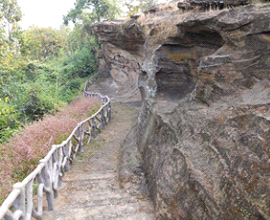